If you love futuristic theme slot games such as those with aliens and other out of nowhere stuff, Reactoonz 2 is the right one for you. It offers a different twist from the original Reactoonz by Play’n GO. 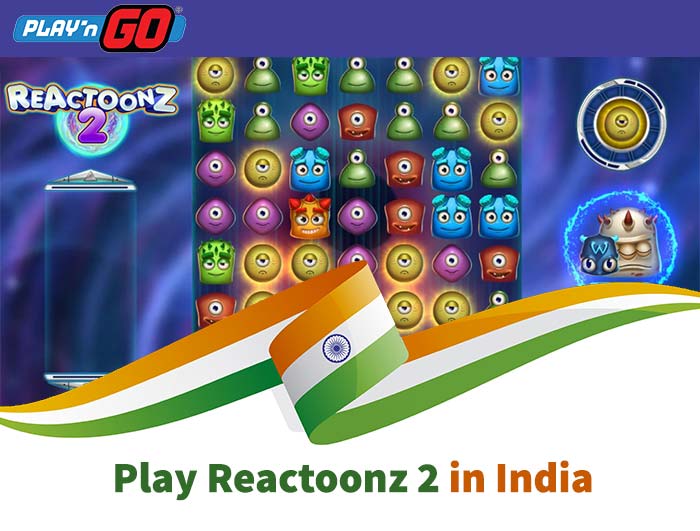 The game board has a 7×7 matrix on which the colorful one-eyed and two-eyed Goons cavort. There are 8 standard symbols, which differ in color and number of dots. The one-eyed Toons are responsible for the low win levels, while the two-eyed ones pay the higher wins. Furthermore, in the base rounds, there are the uncharged wild, the electric wild, energoon wilds, and of course the all-dominant gargantoon. At the top right is the Fluctometer. Below that, you’ll find the Quantumeter where the Energoon Wilds and the Gargantoon are loaded.

To the left of the screen is the display of the winning combinations of the current game round. Since the chain reactions, also known as the Avalange function, take place at high speed, this makes sense for all gamblers who would like to know which combinations have brought them the win. Below the screen is the familiar Play’n GO display and control module. It is graphically adapted to the machine and fits skillfully into the overall picture.

How to play Reactoonz 2?

It is a cluster pay slot, and the goal is to land at least five identical symbols in a cluster either horizontally, vertically, or both. If you successfully achieved the cluster, a cascade feature will enable new symbols to fall onto the grid. First, you set your bet per game round. You start with 20 cents per round. The maximum bet is €100. There is no autoplay and turboplay and each game round must be at least 5 seconds.

The round is started by clicking on the big start button. The symbols drop from the top into the game field. A block of at least 5 Goonz in horizontal and vertical connection triggers a win. At the lowest symbol, a combo of 3 gives back just a tenth of the bet, at the highest it gives back the bet of the round. However, it is quite common that there are larger blocks, which then also provide for official winnings. In addition, Play’n GO has equipped the game with a few extra features, which can increase the winnings. 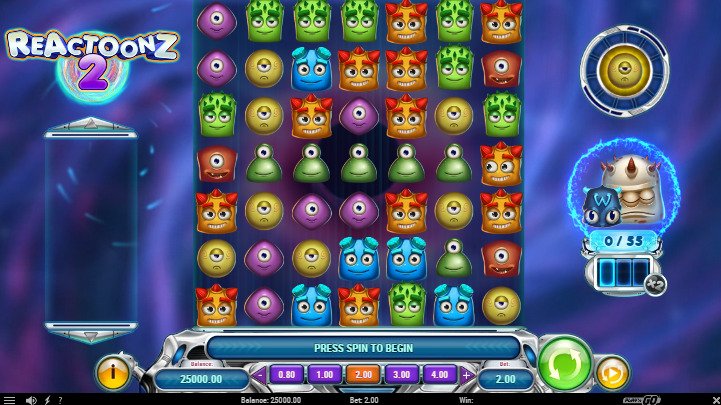 There are plenty of symbols in this game, specifically the eight paying symbols present in the first Reactoonz slot. They are alien symbols with the two eyes as the high-paying ones and the one eye as the low-paying alien.

Uncharged wild – It pertains to wins or wild pair explosion that happens next to the symbol.

Electric wild – This symbol appears once a fluctuating symbol wins either by charging the uncharged wilds or filling the fluctometer.

Energoon wild – It is released by quantumeter if it reaches level 1 or 2. It can be used to substitute for all other symbols.

Gargantoon Wild – It is released by quantumeter if it reaches levels 3 and 4. It can also be used to substitute all other symbols.

The top-most feature is the quantumeter, which is filled by winning clusters. There are four quantumeter levels, and each has a corresponding charge. For level 1, the charges equate to 55. The total charges are 85, 100 charges for level 3, and 135 charges for level four for level two. As you spin, the meter is filled up until no new wins are created. It will release energoon wilds depending on the level, which is usually in levels one and two. If level 3 or higher is reached, it will trigger the release of Gargantoon wild. When level 4 is reached, it will add a 2x multiplier.

A wild pair explosion is triggered if two or more electric wilds stay at the end of the spin. What to expect?

The best thing about Reactoonz 2 is that you can play it on a mobile device. It works perfectly on both iOS and Android phones.

Reactoonz 2 is a perfectly constructed slot game. The graphics are crisp and clear, filled with entertaining animations. However, you should not forget that it is a highly volatile game. If you love this game, you would surely love other similar games like Hall of Gods, Mega Fortune, Book of Ra Magic, and Sweet Bonanza.

Can you play Reactoonz 2 on mobile?

Of Course! All Play'N Go games are mobile optimized. You can easily play Reactoonz 2 on your smartphone and tablet.

Can you get bonus in Reactoonz 2?

Yes, you can receive many bonuses such as Wild Pair explosion in Reactoonz 2 slot.

Is Reactoonz 2 a reputable slot?

Can you play Reactoonz 2 for free?

Yes, you can play Reactoonz 2 for free without depositing any real money.

What is the RTP value of Reactoonz 2?

Play for real at our recommended online casinos