When talking about slot games, Starburst is number one on the list. It is one of the most popular slot games in the world. Many slot players love it because of the quality of graphics, a wide selection of betting options, and low volatility making it perfect for casual players. 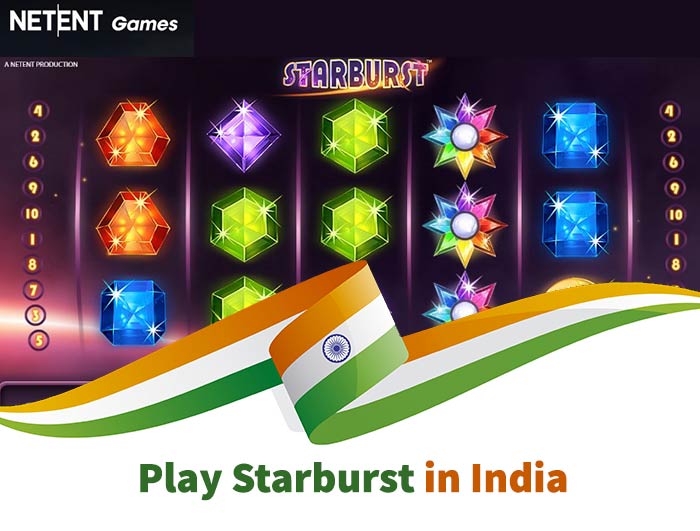 How to play Starburst slot?

It follows a five-row three-reel layout with ten paylines, which can be paid both ways. Comprehensive betting options are ranging from 0.10 to 100. It is fixed with ten paylines, and you can play with all of them active regardless of your bet. Starburst has an autoplay feature, which you can use to play a chosen number of rounds instantly. Moreover, you can set not only the levels, but also the coin value that you want to bet per spin. A higher number of paylines and levels increases your chances of winning, but also requires a higher bet.

If you are one of those players who like to take risks, then you can play with the highest possible stake right from the start. To do this, simply click on the “Max Bet” button. In the corresponding menu, you can set how many spins should be played in a row. Besides the colored diamonds, there is also the bar symbol, the number 7, and the wild symbol, which appears on reels two, three, and four. What is incredible here in the Starburst slot is that the paylines are counted in both directions. This is not the case with all slots, so your chances of winning are increased here.

There are no bonus rounds or free spins in this online slot. Instead, the wild symbol gives you the chance to fill your account with money or points in addition to the normal winnings. This symbol appears on reels two, three, and four and substitutes for all other symbols. This means that the entire reel is filled with this symbol. This results in additional automatic spins, in which you can collect quite a lot of points. The maximum number of additional spins here is five.

When playing Starburst, you will encounter eight symbols, and each of them is categorized into low-paying and high-paying symbols. These symbols include a BAR symbol, yellow gem, seven, orange, green, purple, and blue gem. If you come across five BAR symbols, you will get 25x your bet amount on the payline, and it includes all five reels awarding 50x your bet. The Starburst Wild is the eighth symbol, and you can quickly identify it because of the colorful star symbol. It is the most powerful symbol as it replaces all other symbols on the reel.

Starburst offers a two-way win feature. While most slots only pay out when combinations are reached in paylines from left to right, Starburst also pays out combinations from right to left. 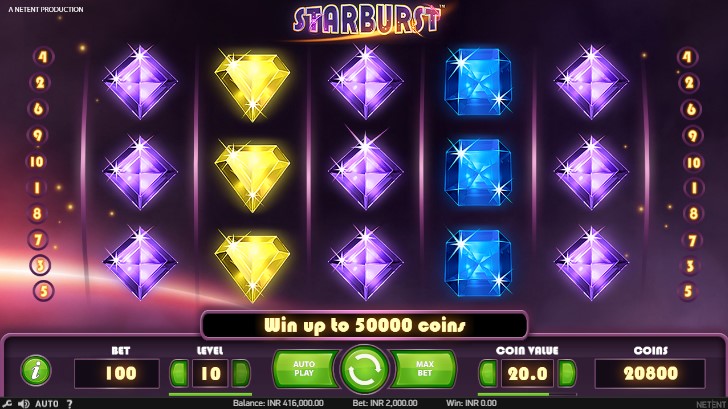 It is unfortunate that Starburst does not offer free spins. On a positive note, it has a unique wild and a respin feature. If you are lucky to activate Starburst wild and it lands on the reels, it will cover the entire reel and triggers the respin feature. If another wild appears, it will activate another respin. It can trigger up to three respins. Here’s another unique Starburst feature, if the BAR symbol lands on reels 1 and 5, your bet amount will be multiplied by 500, which results in a massive win.

NetEnt has given Starburst low volatility. It means that you can look forward to constant profits. They are usually in the lower range, but small gifts are known to keep players active. You can also play for a long time with a relatively small budget. That is one of the reasons why the Starburst is so popular as a free spins slot for bonuses.

Just like any other games developed by NetEnt, Starburst is mobile-optimized, meaning you can play it anytime and anywhere using the device of your choice. It is compatible with iOS and Android and can be played on both portrait and landscape mode. As long as you have a reliable Internet connection, you can play Starburst.

Starburst is one of the most popular and favorite slot games by Indian players and slot players across the globe primarily because of how simple the game rule is. One of its notable features is the double-direction paylines. They keep you engrossed with the symbols on the reels, especially the Starburst Wildlands here. You can avail respins, which increases your chances of winning an enormous amount. If you are fond of Starburst, you will surely love other similar slot games like Mega Joker, Immortal Romance, Raging Rhino, Jammin’ Jars, and Narcos.

Can you play Starburst for free?

Yes, you can indeed play Starburst video slot for free. When you feel like winning money, then you can play for real money.

Can you play Starburst on mobile?

Yes, all NetEnt games are optimized for mobile devices. You can seamlessly play Starburst slot on your smartphone.

Can you get bonus with Starburst?

Yes, you can get bonus with Starburst online slot machine.

What is the payout ratio of Starburst

Where to play Starburst online?

You can play Starburst in almost every online casino in India. Some of the best online casinos that offer Starburst are LeoVegas, Casumo, Pure Casino, Casino Days, Rizk Casino, Twin, Wildz, 10Cric, BetWay and Royal Panda.

Is Starburst a legit slot?

Yes, Starburst is the most popular slot game in the world. It is provided by a reliable gaming provider, NetEnt.

Is it legal to play Starburst in India?

Yes, it is legal to play Starburst in India. There is no law against online gambling in India.

Play for real at our recommended online casinos