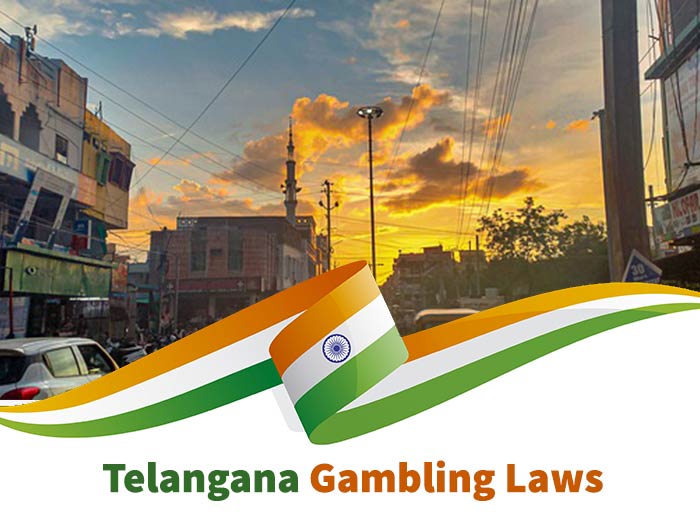 The gambling laws in Telangana are one of the strictest in India. It sees gambling as an issue that needs serious intervention, and one way of solving the issue is by banning it completely in Telangana. Residents in Telangana who want to participate in gambling activities have to do so at their own risk. In this article, we are going to discuss Telangana Gambling Laws, the landscape, and whether or not it is possible to gamble in Telangana.

How to gamble from Telangana?

While Telangana has a stringent gambling law, it does not necessarily mean that you can’t gamble. Gambling is still possible within the state borders. Another risky way is to gamble online. There are foreign online casinos that admit Indian players, including Telangana players. But if you get caught playing on online casinos, it will be considered a criminal offense and you can get punished for that. You may face prison for up to a year and a fine of Rs. 10,000.

Is gambling legal in Telangana?

When talking about legal matters, the answer is plain and simple – NO! It is illegal to engage in gambling activities in Telangana. All types of gambling are not allowed except horse racing. However, betting is only permitted when made via licensed bookmakers. Playing at online casinos seems risky as well.

If you look at Telangana Gambling Laws, you’ll notice that it is a bit confusing, and probably it has something to do with its origin. It was not an independent state. It used to be a part of Andhra Pradesh until 2014. Back then, it follows the Andhra Pradesh Gaming Act of 1974. Since it became an independent state, it now has its set of gaming laws under the Telangana Gaming Act of 1974.

Under the Telangana Gaming Act of 1974, a game of luck or chance in all forms is strictly prohibited. However, it does not put distinctions between offline and online gambling. The law was amended and is now called the Telangana Gaming Act of 2017. Under the newly amended law, it is considered illegal to gamble in Telangana regardless of location, including cyberspace, as long as it is within the state borders. It is also prohibited to use the space for gambling, which simply means that you are breaking the law if you engage in online gambling. If caught, you could be imprisoned for a particular period of time and could be fine up to Rs. 10,000.

There are around 7 million people in Hyderabad, and for many years, it has been the center for underground gambling. You can find information online about gambling house details in Hyderabad. Many organize casino parties. Although illegal, people are bold in renting portable casino tools for casino events. It’s normal but does not mean legal. Authorities in Hyderabad are doing their best to work against illegal gambling. One of the effective measures they implement is tracing payments from gambling rackets.

Warangal is heavy-handed when it comes to gambling. Despite the apparent disagreement about gambling, there are still underground gambling houses, and there are thriving as years pass by despite strict measures imposed by authorities. In fact, even in the streets of Warangal, you can find illegal activities like cockfighting.

Local lotteries are not visible in Telangana as the state prohibits all forms of gambling, especially gambling based on chance or luck. Telangana used to have a lottery back in the days when it is still a part of Andhra Pradesh state. Should you wish to participate in a lottery, you can do so for as long as the lottery draw is situated in a state that does not prohibit lottery.

Many states in India, including Telangana, prohibit sports betting such as football, cricket betting, and Kabaddi. You can’t find bookmakers in places where bets on sports events are allowed because it does not categorize sports betting as a game of skill. On the other hand, horse racing is tagged as a skill set as per the Indian government.

It isn’t surprising to know that horse racing is allowed in Telangana. Hyderabad Racing Club’s massive tax pays to the government is the main reason that horse racing is finally legalized. Bettors can place their bet on both tote and pool betting. For the record, more than 8,000 people bet on horse racing happening at Malakpet Race Course on a day-to-day basis. It is made possible through Hyderabad Race Club. You can also bet on off-course tote points in places like Nizamabad, Hyderabad, and Warangal. Please note that the winning amount is subjected to 28% tax. In the meantime, tote centers and betting boots in Malakpet Race Course are temporarily closed in line with the current COVID-19 situation.

The original gaming act was amended and now known as the Telangana Gaming Ordinance of 2017. Under this newly amended law, online rummy is no longer allowed in Telangana. Unfortunately, Telangana’s sister state, Andhra Pradesh, has prohibited online rummy too.

If there is one word to describe gambling law in Telangana, it is “stringent.” It does not allow both offline and online gambling except horse racing. However, it does not deny the fact that underground gambling dens are everywhere. These people don’t just break the law but also expose themselves to unsafe and unfair gambling environments. We can only hope that in the near future, Telangana will legalize gambling so players will be protected and learn to gamble responsibly.

Is it legal to participate in online betting in Telangana?

No. Betting in any forms, be it online or offline is not allowed in Telangana.

Is Betway legal in Telangana?

Betway Casino is not allowed in Telangana considering the stringent Telangana Gambling Laws. Is it possible to play still? You can do so but your own risk.

Online lottery is prohibited in Telangana except horse racing.